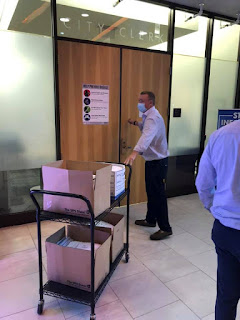 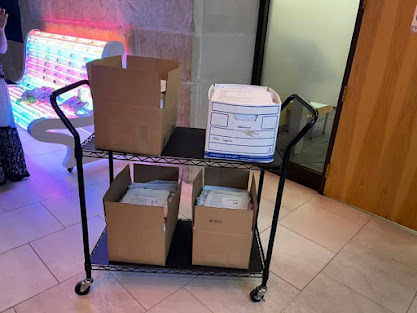 January 19, 2021
Save Austin Now Collects 30k+ Signed Petitions, Submits 24k+ Validated Petitions to Put Camping Ban on May Ballot
City Clerk’s Office Will Begin Process to Validate at Least 20,000 Signatures
AUSTIN, TX — Today Save Austin Now, a nonpartisan educational nonprofit made up of organizations and concerned citizens, announced that they collected more than 30,000 signed petitions since Dec. 1 and submitted more than 24,000 validated petitions to the City Clerk to put reinstate of the camping ban on the May 2021 ballot. The City Clerk’s office will now begin their validation process, which could take several weeks. If validated, the ordinance will be on the May ballot.
The city has a Feb. 12 deadline to approve ballot language for the May ballot.
On July 20, 2019, Save Austin Now submitted ~24,500 signed petitions to the City Clerk to make the November 2020 ballot. On August 5, 18 days later, the Clerk’s office said they were 900 shy of 20,000. Save Austin Now’s two co-founders, Matt Mackowiak and Cleo Petricek, are suing the city for inappropriately throwing out signed petitions.
In 2019, the city completed validation in 18 days. This time, they will have at least 19 days, with still a week for the council to consider ballot language.
The ordinance reinstates the ban on homeless camping citywide, restores the sit/lie ordinance to downtown and extends it to the UT campus and surrounding area, and bans panhandling at night citywide from 7pm-7am.
“This is an extraordinary accomplishment by our supporters and army of volunteers,” said Save Austin Now co-founder Matt Mackowiak. “Last time we had 148 days. This time we had about 50 days, and that included a resurgence of COVID, and Christmas, Hannukah and New Year’s in the middle of it. More than 30,000 Austin residents signed our petition because they desperately want to live in a safe city. That should not be too much to ask. Over the past 50 days, we have had more than 250 unpaid volunteers collect more than 30,000 signed petitions and our efforts have been made possible by more than 1,500 individual donations. Austinites from every zip code, every neighborhood and every demographic have signed our petition. Mayor Steve Adler, camping ordinance author Greg Casar and the City Council refuse to admit that their policy is a disaster for our city, with the homeless population exploding (a 46% increase in unhoused homeless in 2019 per ECHO point in time study), violent crime rising (https://cbsaustin.com/.../homicides-in-austin-this-year...), mounds of trash everywhere, parks being ruined, and worst of all, not one homeless person in a tent receiving any help at all. Voters will now be able to fix the mess created by the Austin City Council. The camping ordinance has harmed public safety, public health, tourism and the image of Austin, while making our homeless less safe. We are not anti-homeless; we are anti-camping. We want the homeless safe in shelters, in transitional housing, or at the state campground where it is safer for them and where services are provided. Together, we can save our city.”
“I am so proud of everyone who worked to make this happen,” Save Austin Now co-founder Cleo Petricek. “This is a tremendous achievement given the logistical challenges of COVID and the holiday season. We are so grateful to everyone who signed, everyone who volunteered, and everyone who donated to our efforts. I am a lifelong Democrat. This issue is personal for me. I have sheltered homeless individuals in my home. I feel so passionately about this because I see this as a standard of living issue for every neighborhood in Austin. Residents should be able to walk to a park, or to school, or to their car without being accosted or feeling unsafe. Our city leaders have not listened to the residents. Now residents can have their voice heard. We all want a safe city and we all should demand a safe neighborhood. Restoring the camping ban with save our city.”
"Parents of UT students want to know that their kids are safe on and off campus, and that’s why we started SafeHorns,” said SafeHorns president Joell McNew. “Today is a victory for making the UT campus and surrounding area safer for UT students Our coalition of concerned parents, students, alumni and stakeholders has focused on improving safety on and around UT Austin for the last five years. We strongly support this effort. We only wish the City of Austin had agreed to the request of the UT Police Chief in 2019 to exempt the UT campus from the repeal of the no-camping ordinance, but they refused. We believe that the combination of banning homeless camping citywide, extending the sit/lie ordinance to the UT campus and surrounding areas and banning panhandling at night will dramatically improve the ability for police to be a front line in getting homeless the services and help they need, while protecting both students and the homeless from those who wish to prey on their vulnerabilities.”
“The Austin Police Association is honored to support the Save Austin Now efforts to reinstate the camping ban,” said Austin Police Association president Ken Casaday. “The taxpaying citizens of Austin were never truly allowed to participate in the process of making changes to the city ordinance. Additionally, the Chief of Police was ignored on this important public safety issue. We believe it’s time for the community to have a say in an ordinance that drastically affects Austinites and our tourism industry.”
To learn more, please visit http://www.SaveAustinNow.com.
# # #

June 11, 2021
Dear Austin City Council Members and Planning Commissioners, As a local who was born and raised in Austin, I love Barton Springs! It along with the Hike and Bike Trail are the 2 Jewells of Austin. I am also 2x season pass Austin Recreation swimmer Buyer. I really enjoy this Season Pass option, as I get to skip to lines. I also love Deep Eddy Pool and all the City of Austin's public Pools. I love the fact that NO dogs are allowed inside of Barton Springs Pool! I was attacked by a dog as an infant child and have a so/so relationship with dogs to this day. One of the JOYS of Barton Springs is its "peaceful serenity" in the middle of a bustling city. No dogs No Alcohol. It is a peaceful, Zen-vibe, and heck I even enjoy the freedom "clothes" optional elements as well. It is easy enough to get FOOD and DRINKS and alcohol on Barton Springs Road, for example Barton Springs Saloon, Baby A's restaurant and their Purple Margaritas, Austin EastCiders, etc. so I feel
Post a Comment
Read more