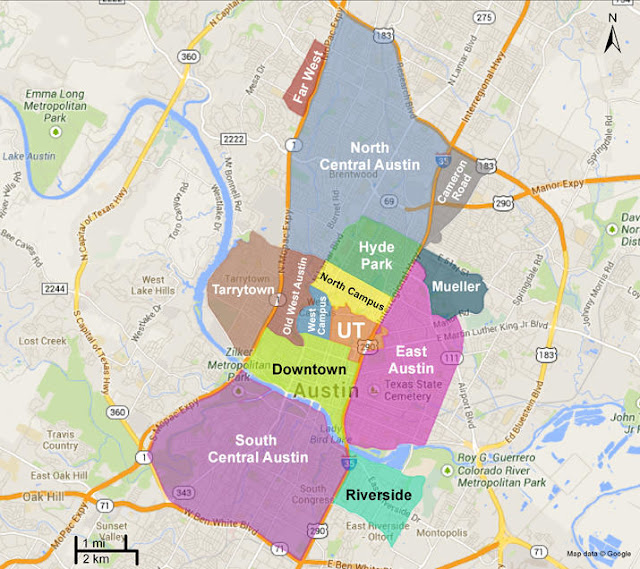 Dear readers of the ATX: the Austin Real Estate Life Blog...I, GVM via email, read this article today. It is derived from the Austin Monitor. If you are interested in local-infused Austin information, historic news, city municipality updates, and general Austin development news, among others subjects, I highly recommend purchasing an Austin Monitor subscription. It is pretty affordable. So go now and sign up for the Austin Monitor!

Moving along, this specific Article in the Austin Monitor particularly struck me today, because my personal Real Estate Sales, Leasing and Development Brokerage practice with the  Austin Silent Market, is mainly focused in the Central, Core neighborhoods of Austin, TX.

I personally agree with the relevance and general themes of this article! As I have personally noticed via recreational and professional methods, Central Austin is continuing to change over, and yes become gentrified. Central Austin continues to appreciate in value and thus become more expensive. In my early realtor career years, I noticed the Bouldin neighborhood of Central Austin become builder and new modern-home welcoming around the year of 2005 and onward to today. I once previously sold a LOT to my former Austin High School teacher on Bouldin Avenue for just $100,000. Her boyfriend then built her a new home on it.
Nowadays, LOT prices in Bouldin, Travis Heights and Zilker are probably all in the $500,000 and up range, give or take.

Realtors, and the Real Estate Industry have been bullish in regards to Central East Austin change, improvement and development for a decade and half. There were many years where this bullish East Austin residential wave failed. Why? People and the general public did NOT want to live in East Austin. They felt it was unsafe. It was not until, I'd say the year, 2014 or 2015, where the East Austin developments and genuine real estate buyer & tenant demand became mainstream and prominent. It took years of progressive and hopeful attitudes. In fact, I even remember one of my favorite Coffee shops over there called, PROGRESS COFFEE. It was located where today's Brew and Brew is on East 5th and San Marcos Street.

The Domain is fabricated, Central Austin is Authentic.

Chad Swiatecki is a 20-year journalist who relocated to Austin from his home state of Michigan in 2008. He most enjoys covering the intersection of arts, business and local/state politics. He has written for Rolling Stone, Spin, New York Daily News, Texas Monthly, Austin American-Statesman and many other regional and national outlets.
Read more stories by Chad Swiatecki Recent analysis on incomes and migration patterns in Texas shows that Austin and three other Texas metro areas – Dallas, Houston and San Antonio – have seen significant patterns of gentrification in recent years. The recently released research by the Federal Reserve Bank of Dallas shows that incomes and education levels have greatly increased in the areas closest to city centers, which over the past decade have grown more desirable and caused housing prices to increase, pushing out longtime residents as a result.
The study also found that populations of non-Hispanic whites living three miles or less from a city center are increasing in all four cities, with those populations dropping considerably in suburban areas located five miles or more from a city center.
Economist Yichen Su wrote in the analysis that the influx of higher-wealth residents into central areas brings more quality-of-life options in their wake with displaced residents facing longer commutes and other challenges.
Many of the findings bolster the claims of local activists in recent years, with multiple studies suggesting a variety of options to combat displacement.
Nefertiti Jackmon, a former co-chair of the city’s Anti Displacement Task Force and current program manager for the Neighborhood Housing and Community Development Department, said the economic forces fueling displacement erode a city’s cultural fabric by pushing longtime residents away.
“For many people it’s forced because it’s a decision they have to make,” she said “City centers have become more attractive because they’re safer and have more amenities, and those are things that people who lived there have always wanted but weren’t there until those black and brown populations were forced to move. It creates a huge impact on the cultural fabric.” Jackmon said the city’s strategies to reduce displacement include rental assistance programs – with a $750,000 contract currently out for proposals – and a tool to aggregate affordable housing options to make make searching for housing easier. She said the city also recently closed its application process for a $350,000 grant program created to encourage community development corporations to create more affordable housing.
While officials from the city and Travis County have partnered in recent years to bolster workforce development programs and increase the earning power of working-class locals, Jackmon said even middle-income households are feeling the effects of Austin’s growth in median incomes and housing costs.
“Workforce development is not the answer because there are people who are making in the range of $60,000 and above and they are having a difficult time being able to stay in place and live in city centers,” she said. “We cannot pay our way out of this problem and I think it’s definitely more housing supply for sure, and with Austin being a primarily renters’ market we are looking at ways to increase stabilization for renters.”
Brian Kelsey, an economic analyst and researcher for the Capital of Texas Media Foundation (the Austin Monitor’s parent organization), said the Austin market is dealing with slow building growth meeting increased demand from more than one-third of Austin households earning more than $100,000 per year.
“When you look at the earnings differential between well-educated bachelors plus workers and everybody else and how much house they can afford and the preference for living more central, it’s not surprising to have these kind of findings,” he said. “Austin is facing a perfect storm when it comes to affordability challenges. It’s among the fastest-growing economies in the country, is attracting higher-earning very well-educated people … and people will be shocked at how wealthy the city has become.”
In recent years displacement concerns have become part of the larger conversation around the creation of a new Land Development Code for the city. The current draft calls for increased housing density near transit zones as one remedy for affordability, though many neighborhood groups have argued there’s not sufficient data to support that approach.
Dave Sullivan, a local planner and former member of the city’s CodeNEXT advisory group, said the city will have to take steps related to planning and building practices to make an impact on home prices and slow displacement.
“Supply is a necessary but not sufficient solution to the demand. As well as supply you need things like incentives to create smaller units and incentives to make those units closer to workplaces to cut down on transportation costs,” he said.
Photo by Larry D. Moore [CC BY-SA 4.0].
The Austin Monitor’s work is made possible by donations from the community. Though our reporting covers donors from time to time, we are careful to keep business and editorial efforts separate while maintaining transparency. A complete list of donors is available here, and our code of ethics is explained here.

June 11, 2021
Dear Austin City Council Members and Planning Commissioners, As a local who was born and raised in Austin, I love Barton Springs! It along with the Hike and Bike Trail are the 2 Jewells of Austin. I am also 2x season pass Austin Recreation swimmer Buyer. I really enjoy this Season Pass option, as I get to skip to lines. I also love Deep Eddy Pool and all the City of Austin's public Pools. I love the fact that NO dogs are allowed inside of Barton Springs Pool! I was attacked by a dog as an infant child and have a so/so relationship with dogs to this day. One of the JOYS of Barton Springs is its "peaceful serenity" in the middle of a bustling city. No dogs No Alcohol. It is a peaceful, Zen-vibe, and heck I even enjoy the freedom "clothes" optional elements as well. It is easy enough to get FOOD and DRINKS and alcohol on Barton Springs Road, for example Barton Springs Saloon, Baby A's restaurant and their Purple Margaritas, Austin EastCiders, etc. so I feel
Post a Comment
Read more